For many Poles meetings with John Paul II during His pilgrimages to Poland belonged to the most significant experiences in their lives, often having a formative nature. This has been confirmed both by actual participants of these events, and public surveys (e.g. B. Wciórka, W oczekiwaniu na przyjazd papieża do ojczyzny. Komunikat z badań, CBOS, Warsaw 1999). Several publications show the contribution of His Holiness John Paul II to the formation of whole generations of Poles and the newest history of Poland. After His death the opportunity to meet Him in person has been lost forever. However, we still have memories of these encounters as well as material traces of them. One of the places which collects, maintains and provides access to such materials is the Archives of the National Commission of NSZZ „Solidarność”.

Our readers may be particularly passionate about the 3rd Pilgrimage of the Pope to Poland, as it was His first visit to the north of Poland  and at the same time the last one during the communist regime. It was also very important due to its underlying message. During this visit, on June 11-12, 1987, His Holiness called for “solidarity” as of a living in accordance with such principles as “all together” and “all for all”, and gave a message to the youth, based on the defence of Westerplatte. It was also the time of the great Holy Mass for almost a million people gathered in Zaspa, part of Gdańsk. And during this pilgrimage, by the Monument to the Shipyard Workers Killed in 1970 in Gdansk, the Pope was greeted by the silence of a few hundred man of uniformed services protecting the area.

Materials related to these events, held in the Archives of the National Commission of NSZZ „Solidarność”, apart from their historical value, are also very interesting from the “archival” point of view, as they a very diverse group comprising documents, photographs, special issues of underground press, leaflets or posters, as well as maps, VHS  tapes with recordings of the events, vinyl records, versatile commemoration items such as underground stamps, postacards and envelopes, calendars or artifacts such as medals, pins to be used on clothes, books with visible censorship interventions, banners.

Among these treasures a postcard with a logo of the Pomeranian Independest Post is worth noticing. It shows the Pope meeting Priest Henryk Jankowski. They both exchange friendly glances and they are presented against the background of Poland’s contours. Instead of the postmark there is an image of Joseph Pilsudski, whereas in the “addressee” box there is a “Solidarnosc St. Brigida Parochie). It may seem to be a regular postcard, one of many encountered in this period of time, expressing friendly feelings to the Pope, attachment to His teachings, patriotism of the church in Gdańsk. Although appearances can be deceptive, it was agreed by archivists from the Institute of National Remembrance that it was a provocation of the security service. Issued under the NPP name it was supposed to deteriorate relations between Priest Jankowski and the Gdańsk bishop Yadeusz Gocłowski. The authors expected  that the bishop will be affected by the fact that a host of this event was not him, but  St. Bridget’s parish priest.

A commemorative book prepared in the Sacred Heart of Jesus parish in Gdynia led by another Solidarity chaplain – Priest Hilary Jastak (AKKS, 347/79/123) is also very interesting, as it contains a copy of an allegiance address with a stamp, published to commemorate the visit of the Pope, posts with wishes (e.g. by Andrzej Gwiazda and Ewa Kubasiewicz) , as well as photographs and illustrations.  There is also a letter written by two boys, who in 1983 in Poznan gave a greeting card to the Pope, inviting Him to come to Gdynia, and who express their happiness that their dream has come true.

Apart from tunderground press issues reporting the atmosphere of anticipation and then the course of the Pope’s visit (AKKS, 347/74/18; AKKS, 347/74/74), the archive contains materials prepared by the Polish Interpress Agency, presenting the official programme of the visit and sermons subject to embargo before their deliverance (AKKS, 347/19/24).

We should also mention a medal designed and made by the Tricity artist, Gertruda Kuziemska-Wilczopolska. It commemorates events of significance for the history of Christianity in Pomerania. Its fron side presents Great Pilgrims who visited this region within the last thoudand years (both are saints now). The reverse side shows the moment of the Cisterians coming to Oliva.  The medal’s diameter is 7 cm. It was issued by the State Mint in 1987, in 400 pieces made from red patinated brass. 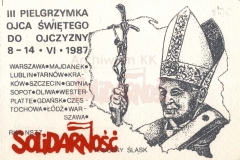 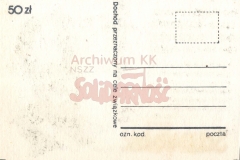 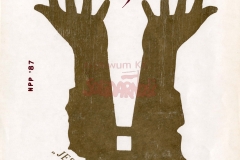 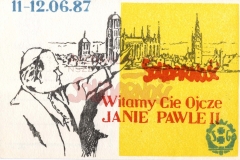 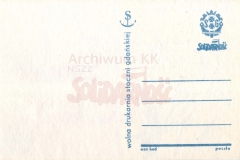 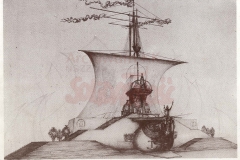 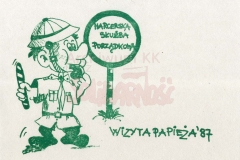 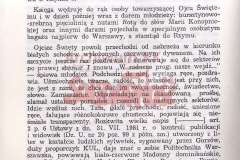 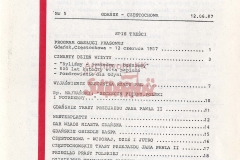 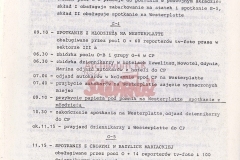 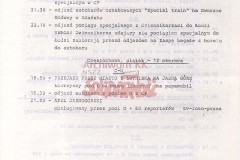 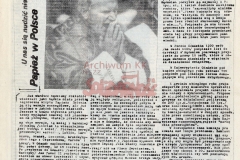 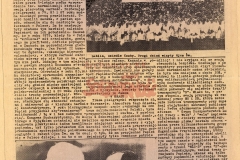 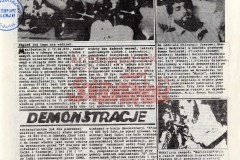 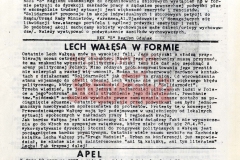 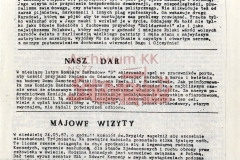 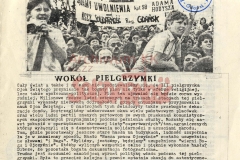 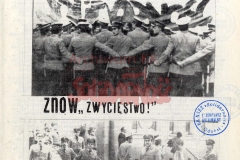 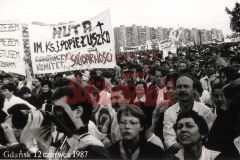 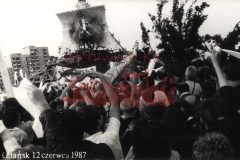