The most often mentioned in a well known discourse on workforce demands raised during the 1980 strikes are the 21 Gdansk demands of the Inter-Enterprise Workers Committee written down on two plywood boards, which were then exposed in the reception room at the shipyard’s Gate 2. It seems a natural choice as their significance and value had been already appreciated at that time and were later included in the UNESCO World Heritage List. Somewhat less popular are the original demands of the shipyard workers (like reinstatement of Lech Walesa and Anna Walentynowicz, construction of the December 1970 victims monument, etc.) or of workers associated in other Inter-Enterprise Workers Committees, e.g. in Szczecin, Elbląg, Jastrzębie Zdrój.

The above mentioned examples are only a small portion of all requests and suggestions delivered by employees to authorities and management of enterprises in August 1980. The Gdansk Inter-Enterprise Strike Committee collection in the Archives of the National Commission of NSZZ „Solidarność” contains the demands of 375 strike committees. Other demands can be found in archival collections of Solidarity Trade Union Committees of particular enterprises.

The collection comprises also the demands of the University of Gdansk Employees from August the 25th, 1980, which we would like to present to you in this article. The text covers half of an A4 size typescript, to be reproduced. The demands are part of the Solidarity Trade Union Committee by the University of Gdansk collection under AKKS 347/37/2. It should be mentioned that they are not the only example of employees’ demands declared at the university, not even the first one (earlier petitions were delivered by the Main Library and the Mathematics, Physics and Chemistry Department staff), they seem, however, to express the attitudes of all university employees.

The demands are composed of five rather general points. The first of them (like in other similar declarations) confirms full support of univeristy employees for the Inter-Enterprise Workers Committee. The other four are strictly related to university issues. The second demand is to grant autonomy to academic institutions. The third one postulates to introduce democratic elections of academic authorities (senate, department councils, etc.), including not only scientists, but also other types of employees among those to be elected. The fourth demand is to implement a reform of the educational system. And the last one provides representatives of the University of Gdansk and the Technical University of Gdansk the right to represent the whole academic community of the Gdansk region (the preserved copy of the postulates, shown below, contains a communication on the establishment of the Gdansk Scientific Community Conciliation  Committee). 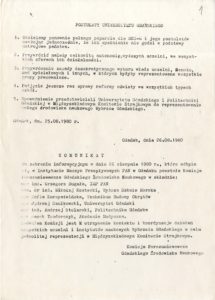