As promised, today’s post presents shares (donation certificates) issued by the Social Committee for the Construction of the Monument to the Shipyard Workers Killed in 1970 in Gdansk. Sales revenues from these shares, as indicated by the name of the Committee, were used for the construction of the monument located in the Solidarity Square in Gdańsk, near Gate 2 of the Gdansk Shipyard. The creation of this monument was one of the first postulates issued by the Gdansk Shipyard’s striking workers in August 1980. The Monument was officially unveiled on December 16th, 1980.

The Historical Archives of the Solidarity National Commission hold a range of archival materials related to this monument.  Among the processed records is the records of the Social Committee for the Construction of the Monument to the Shipyard Workers Killed in 1970 in Gdansk (fond No. 31). The Committee was set up to construct the monument commemorating the shipyard workers fallen in December 1970. The series identified in this fond include: correspondence, press clippings, technical documentation, photographs.

Archival materials related to the monument are also to be found in the records of the Inter-Enterprise Strike Committee (fond No. 1), specifically in some issues of the Strike News Bulletin “Solidarność” of the Gdansk Shipyard or in the folder titled “Financial support for the Inter-Enterprise Strike Committee. Donations for the construction of the Monument to the Shipyard Workers Killed in Gdansk“. The records of the “Solidarność” Gdansk Region (fond No. 7) contain event programmes, press clippings, information bulletins.

In the collection of the Independent and Self-Governing Trade Union “Solidarity” and opposition groups by the Ministry of Internal Affairs (fond No. 75) there is a recording from the ceremony of unveiling the monument, and the programme of 1981 December Days. Our holdings contain numerous photographs of the monument, to be found in the photographic collection of the Archives of the Solidarity National Commission  (fond No. 78) and in collections donated by private donors.

In the documentation of the Social Committee for the Construction of the Monument to the Shipyard Workers Killed in 1970 in Gdansk there is the decision issued by the Voivodeship Office (regional level state administration) in Gdansk on November the 18th 1980, allowing for organization and conducting of fund-raising for the construction of the monument. This decision was taken on the basis of the 15th of March 1933 Act on Public Fund-raising. This document was a proof of authorization granted by the Social and Administrative Issues Department of the Voivodeship Office to organize and conduct public fund-raising in the Gdansk region in three forms. In accordance with this decision the Committee was allowed to collect resources in the money box located in the hall of the main railway station in Gdansk and to money boxes in workplaces. The third form of fund-raising allowed was to sell numbered shares (donation certificates) distributed by Inter-Enterprise Founding Committees.

It is worth explaining that in archival science shares – as advised by Methodological guidelines on collecting and processing ephemeral prints in state archives from 2007 – together with posters, tickets, brochures and price lists are treated as ephemeral prints. This is why they belong to this part of archival holdings, which contains printed materials or materials reproduced by other methods, seldom hand-written, usually of a political, social, religious, economic or cultural nature. They reflect diversified aspects of social life and are created ad hoc by the order of various entities, e.g. political parties, social organizations, economic entities, and private persons. Typically they are short-lived, and they use text content and graphic elements (icons).

A few shares sold during the fund-raising for the construction of the Monument to the Shipyard Workers killed in Gdansk in 1970 have been preserved in the Archives of the Solidarity National Committee. These are mainly double-sided sheets of various sizes, usually 91 x 138, 100 x 145 mm. They are not all alike. The main motive on the front side is the image of the monument against the background of the Lenin Shipyard in Gdansk – either a technical drawing of the monument with the shipyard at its background, or a photograph taken during construction, when the three crosses and anchors were already in place, but without bas-reliefs.  On the back side these shares are also not exactly the same. Invariable elements of all shares are “share for the monument” inscriptions, the share’s value – 100 zloty and the seven-digit number of a particular share. The Archives of the Solidarity National Committee is proud to have the share numbered 0000000 in its holdings. Impressions of the Committee stamp with its address, telephone number, and the “Solidarność” inscription also appear on the back side of some shares.

Among the most exceptional artifacts is the 170×243 mm share, numbered 2000033. Apart from the technical drawing it contains annex with “December 16th, 1980, Solidarity” inscription, the 11th verse of the 29th psalm translated by Czeslaw Milosz, and an additional image of the monument, this time presented on a brass marked “December 1970-1980”. On the inside of this share there is a stamp with the address and telephone number of the Committee. Despite “the share for the monument’ inscription there is another one: “The Lord will give strength to His people. The Lord will bless His people with peace. The sign on the wall near the Monument of Killed Shipyard Workers in Gdansk 1970. Psalm 29, verse 11, translated by Cz. Milosz”. On the same side there is a stamp of the bank account number of the Committee. This share was worth 500 złoty.

Visit us at the Archives of the National Commission of NSZZ „Solidarność”.

Those interested in our archival materials are kindly invited to make use of our holdings in our Reading Room. They are accessible from Monday to Friday between 9:00 and 15:30. Please let us know in advance about your planned visit either by phone +48 (58) 308-43-92 or at . 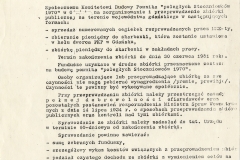 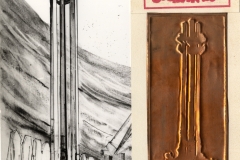 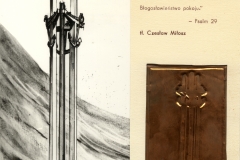 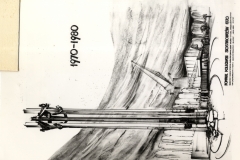 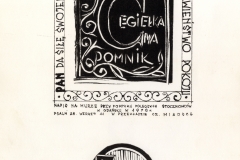 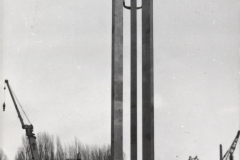 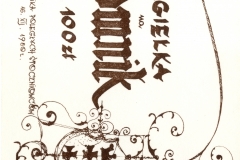 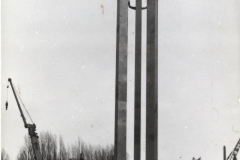 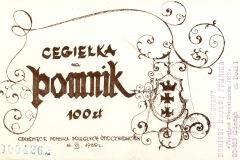 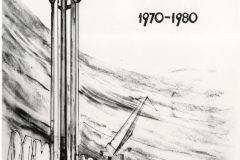 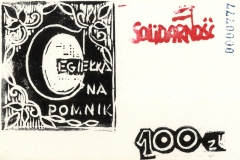 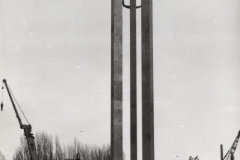 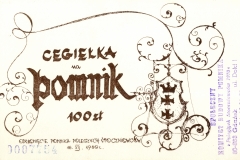 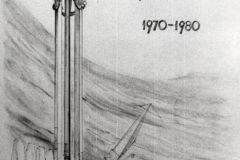 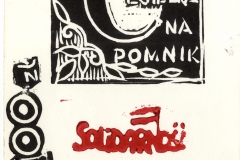