This time we would like to focus on the archival materials of the Inter-Enterprise Strike Committee (ISC). It is worth mentioning that the ISC in Gdansk was established on August the 16th, 1980 in the Gdansk Shipyard. In the beginning the ISC had 18 members. Its Chairman of the Committee was Lech Walesa. Based on postulates submitted by enterprises on strike a list of 21 postulates was created and submitted by the delegation of the Inter-Enterprise Strike Committee in the Voivodeship Office. On August the 22nd, 1980 the ISC announced that it was the only body entitled to make a decision to end the strikes. On the next day the ISC made an announcement that the strikes were not going to end unless the right to establish trade unions would be secured.  The final agreement with the Government Committee was signed by the Bureau of the ISC on August the 31st,1980. On the next day the ISC was transformed into the Inter-Enterprise Founding Committee of Independent Trade Unions.

The archival materials the Inter-Enterprise Strike Committee constitute one of almost 200 so far distinguished fonds and collections of the Archives of the National Commission of NSZZ „Solidarność”. Together they are composed of 55 archival units. The majority of these documents are written in Polish, only few of them in German, English and Swedish. The said archival fond is divided into two series. The first series contains materials related to the Inter-Enterprise Strike Committee, the second one to the Bureau of the Inter-Enterprise Strike Committee. The subseries extracted in the first series include: communications and announcements; agreements; negotiations; delegates; bulletins; prints and correspondence.  The subseries in the second series are: the bureau’s protocols, communications and announcements’ postulates; the press desk; correspondence and information materials.

The scans presented below include, i.al., the communication of the Inter-Enterprise Strike Committee from the 16th of August 1980, informing about the establishment of the ISC, its objectives and decisions. Also presented is the first page of the 15-page-long published version of the agreement signed between the Government Committee and the ISC on August the 31st 1980 in the Gdansk Shipyard. The ISC documentation contains handwritten notes made during negotiations between the representatives of the Bureau of the ISC and the Government Committee. Preserved are also handwritten lists of the ISC members, e.g. the list on a spread over, A5 format, narrowly-lined sheet. The ISC documentation includes the full, 13 issue set of Strike Information Bulletin “Solidarność” issued by the Gdansk Shipyard. Shown here is the first page of the first issue dated the 23rd of August 1980. During the August 1980 strikes a lot of leaflets were published, including a leaflet of the Gdansk Shipyard Free Print Shop containing the Pope John Paul II address to the Primate of Poland, Cardinal Wyszynski. The ISC correspondence includes 17 folders. Presented here is the letter of the Works Council of the Chemical Equipment Construction Research and Development Centre in Cracow to the ISC.

In the second series of the said fond we may find a piece of handwritten protocol No 1 of the ISC Bureau meeting with the exact date and hour of the meeting. The Bureau of ISC issued its own communications and announcements. Presented below is one of these, informing about the lack of representation of the Young Poles’ Movement and the Committee for Social Self-Defense KOR in the Bureau of ISC, signed by the Bureau’s members.  The “press desk”  folders contain, i.al., poems related to the August 1980 events, including “To you, my homeland”, referring to the 14th of August and the ISC. It is worth mentioning that the collected documentation is not unilateral. It contains also ephemera published by the communist authorities, like a publication issued by presidents of Gdansk, Gdynia and Sopot, addressed to the citizens of the Three Cities and informing them how harmful the strikes were.

Visit us at the in the Archives of the National Committee of NSZZ „Solidarność”. 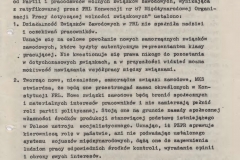 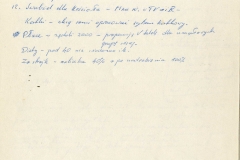 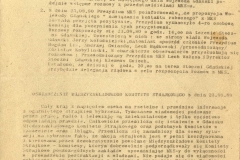 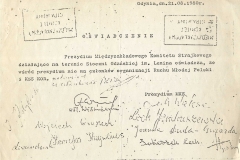 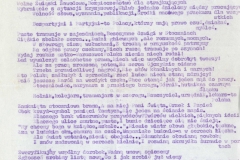