We invite you to to get acquainted with archival materials to be found in the Solidarity National Commission Archives.

It is worth mentioning that „Solidarność” was the most powerful social movement in the Polish history of the XX century. It began the process of a peaceful transition of the society and the authoritary – totalitary state into the democratic system. In the summer of 1980 Poland experienced a wave of strikes and confrontations with the authorities.

A turning point for the birth of “Solidarność” was the strike in the Lenin Shipyard in Gdansk, which began on August the 14th, 1980. On the 16th of August the Inter-Enterprise Strike Committee was established there. Lech Walesa was appointed its Chairman. Based on postulates submitted by enterprises on strike a list of 21 postulates was created and submitted by the delegation of the Inter-Enterprise Strike Committee in the Voivodeship Office (regional level state authority) on August the 19th, 1980, together with the demand to start negotiations between the government and the Inter-Enterprise Strike Committee. The strike was successful as workers who had initially gone on strike with specific demands (pay rise, returning jobs to Anna Walentynowicz and Lech Walesa, establishing a commemoration board for shipyard workers killed in 1970) did not stop there and continued their strike demanding first of all to create self-governing trade unions independent of the government and the Communist party as well as to be granted a right to strike, freedom of speech, pronting and publications and releasing political prisoners.

The inventory of the Inter-Enterprise Strike Committee documentation as well as of other described collections is published in the online national archival information system (the IZA database). This database is accessible on the website of the Head Office of State Archives (www.archiwa.gov.pl). A large portion of the Inter-Enterprise Strike Committee documentation has been digitalized. Scans of this documentation may be viewed on the website of the National Commission of NSZZ “Solidarność” Digital Archive (www.solidarnosc.org.pl:8080/dlibra).

Currently presented are the leaflets disseminated during the August 1980 strike. They informed about the most significant demands of the workers in enterprises represented by the Inter-Enterprise Strike Committee, about the necessity to continue the protests as well as about the contacts with the Government Committee. They come in various sizes, from an A3 format to small pieces of paper covering a few square centimeters.  They were copied on paper of differing quality and in different font colours. It is stated that they were available for free and that they had been printed by the “Free Print Shop of the Gdynia Shipyard” and “Free Print Shop of the Gdańsk Shipyard”.

One of presented leaflets contains the appeal of Pope John Paul II to the Cardinal Wyszyński. This leaflet was to assure those on strike in the shipyard on the support provided by John Paul II, who was informed on a daily basis of the progress of the strike from the first pages of newspapers and from TV and radio broadcasts. The collected documentation is not unilateral. There are leaflets signed by the then chief executive Klemens Gniech, informing the shipyard workers about the reached agreement between the delegates of shipyard departments and calling the workers to return to work. These leaflets also inform about the pay rise in the amount of 1500 zl for everyone.

Visit us at the Archives of the National Commission of NSZZ „Solidarność”. 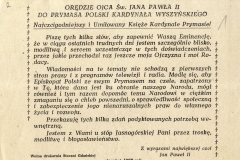 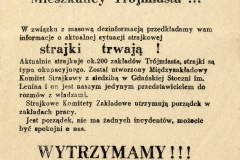 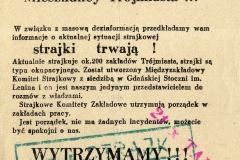 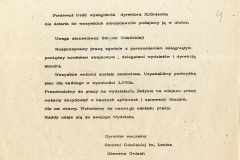 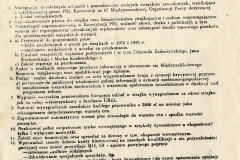 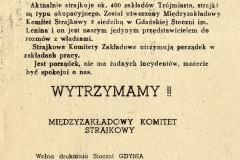