The telex presented below[i] comes from the collection of the National Coordinating Commission & the National Commission of the Solidarity Trade Union, containing over one thousand units with telex messages addressed to the national authorities of the union in Gdańsk, from February to November 1981. Telex was a widely used communication channel at that time.

Among the preserved telexes there are messages a variety of topics, including numerous appeals of members and factory committees of the Solidarity Trade Union, resolutions, communications and statements issued by various union structures, descriptions of strikes and workers’ protests, information on propaganda campaigns by the Security Service and repressions by Citizens’ Militia. Telexes also contain information on situation at workplaces, meetings of trade unionists with government representatives, and on anniversary commemorations.

An example of a message quoting foreign press is a telex on “foreign information service” of November 9, 1981, signed by Jan Jarco. The message is addressed to Arkadiusz “Aram” Rybicki, with a request to share it with the Presidium members. The message covers reports published by the Wall Street Journal, New York Times, Le Figaro and the Associated Press on November 5-7, 1981, related to the meeting that took place on November 4, 1981 in Warsaw between General Wojciech Jaruzelski, Primate of Poland Józef Glemp and the leader of the Solidarity Trade Union Lech Wałęsa. This meeting was known as the “Meeting of the Three Leaders.”

This meeting was an initiative of the Polish Episcopate. The bishops were deeply concerned with increasing social tensions caused by difficult social and economic situation in Poland and a growing threat of Soviet intervention, which could lead to a civil war. It was also the aftermath of an earlier meeting between Primate Glemp and General Jaruzelski, which took place in October 1981, concerned about a proposal to create a “platform of national understanding”. During the November meeting the three parties discussed the conception of this proposal. After the meeting, Primate Glemp sent a special telegram to Lech Wałęsa, expressing his belief that it would bring good for Poland (Leszek Biernacki, Stanowisko Kościoła wobec NSZZ „Solidarność” i sytuacji w kraju, English: The Church’s attitude towards the Solidarity Trade Union and the situation in the country. NSZZ “Solidarność” Wszechnica, http://www.solidarnosc.org.pl/wszechnica/page_id=176/index.html, accessed: 20.11.2020).

Foreign sources cited in the displayed message perceive this event as an opportunity for agreement and for creating a platform for dialogue between the conflicted parties. They emphasize the unprecedented nature of the meeting and the good will of all participants. They draw attention, however, to the fact the General Jaruzelski did not consult the Politburo on this matter, and that more dogmatic circles in his party may deny agreement and dialogue, and try to sabotage the negotiations in order to overthrow Lech Wałęsa and cause a split in the Solidarity Trade Union. The media also notice that Lech Wałęsa’s conciliatory approach may be neglected by those members of the National Commission who have censorious attitude towards him.

Those interested in the above described document and in our other archival materials are kindly invited to see our holdings in our Reading Room of the Archives of the National Commission of the Solidarity Trade Union at Wały Piastowskie 24. They are accessible from Monday to Friday between 9:00 and 15:30. As the number of users accepted daily is limited, please let us know in advance about your planned visit either by phone +48 (58) 308-43-92, +48 (58) 308-44-20, +48 (58) 308-43-83, or at . Due to the coronavirus pandemic all users are required to cover their nose and mouth! 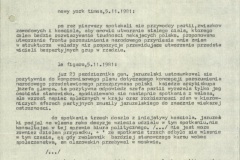 [i] “Telex, international message-transfer service consisting of a network of teleprinters connected by a system of switched exchanges. Subscribers to a telex service can exchange textual communications and data directly and securely with one another. Communication is opened by entering the assigned call number of the destination subscriber.” Encyclopedia Britannica, https://www.britannica.com/technology/telex  (accessed: 28.11.2020).